Design a site like this with WordPress.com
Get started
Skip to content
psychocod3r Projects and Tinkerings, Raspberry Pi, Unix and Linux October 14, 2019April 29, 2021 4 Minutes

I just rebooted my Raspberry Pi with all new software. The reason? Because the version of Raspbian it was running was so old that even the package manager was out-of-date and I couldn’t upgrade it. So after several frustrating attempts to upgrade to the latest version of Raspbian through the package manager, I finally decided to just swap out the micro-SD card for a new one with a freshly burned clean install of Raspbian.

Okay, so Step 1 of this process involved going to the official Raspberry Pi website and downloading an image of Raspbian Buster from the Raspbian download page. I then booted into Arch Linux and ran the proper command to burn the image to my micro-SD card. After examining my drives with fdisk to determine which one was the micro-SD card I ran a command that looked something like this:

The binary copy took several minutes, so I just waited around for a while, probably put some caffeine and possibly other substances in my body during that time. When it was finished I opened up my Raspberry Pi’s case and swapped out the old SD card for the new one.

Step 2 was to actually boot the thing up and enable SSH so that I would be able to log in and configure it remotely. This required an HDMI screen of some sort so I could actually see what I was doing, and unfortunately the only HDMI screen available to me at the time was the Samsung TV in the livingroom. I waited until everyone else was asleep so I wouldn’t have to worry about anyone wanting to watch TV while I was configuring shit, and then I took my Pi downstairs along with a wireless mouse and keyboard and accompanying USB dongle. I swapped out the HDMI cable going from the cable box to the TV for the one attached to my Pi, plugged the Pi in, and watched it boot. Success!

I must say, it was kinda weird using that huge screen to console into such a tiny device. But I got what I needed to get done done. I went into raspi-config as before and enabled SSH. Then I configured it to boot into the CLI (this was to save processing power, since I intended to run it as a server rather than a personal computer). I also set an admin password and made sure it was something really strong. 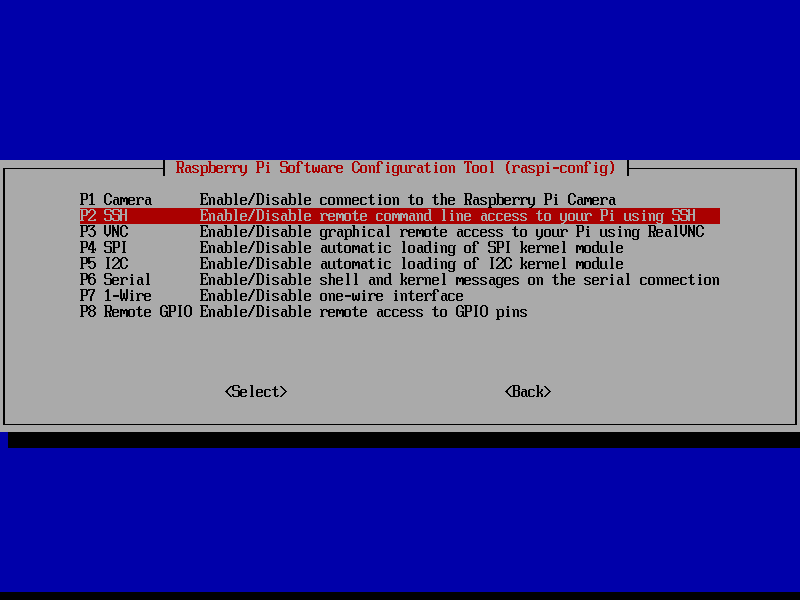 While I was in the LXDE desktop, I also did some poking around in the various menus that were there. I tried out a few different wallpapers, and took a brief look at the Mathematica program that came with the installation.

The next day I booted my Raspberry and tried logging in from my Thinkpad battlestation. There were a few places where I had problems logging in through SSH, and I had to go into Regedit and delete the registry key for the old SSH public key value, which was still being stored. I’ll share the screenshot because (1) it looks neat and (2) what the hell, it’s a public key; not like anybody can use it to hack me.

You know what, I’ve collected a lot of neat registry hacks over the last 15 months or so that I’ve been using Windows. I should create an official Psycho Cod3r Compendium of Registry Hacks sometime. It would make for a good ebook that I could sell, or maybe give away as a freebie.

But in any case, once I deleted the old key and logged back in, refreshing any public keys that were stored, I was able to basically do whatever I wanted. I loved the fact that apt-get actually worked now. I used it to install several programs on my Pi, including Midnight Commander, cmatrix, and a LAMP stack (Apache2, PHP, and MySQL Server), which I am now using to host a small website.

In addition to replacing the operating system and installing some new software components, I also added a new monitor. I ordered a 4:3 8″ LED monitor off Amazon that has HDMI, VGA, BNC, and Composite Video interfaces, so it will run with pretty much anything. I was going to use it for a second Raspberry Pi that I intended on buying so that I could use it as a desktop computer while using my original Pi as a server, but I’m a little short on money this month, so that will have to wait. In the meantime I figured why not plug the thing into my current Pi and just use it as both a server and a personal computer for the time being? Turns out this can seriously slow things down in certain situations, but it’s only a temporary fix until I get a dedicated desktop Pi, so I can live with it.

Here’s a pic of my new display hooked up to the Raspberry Pi as it’s running cmatrix in text mode. 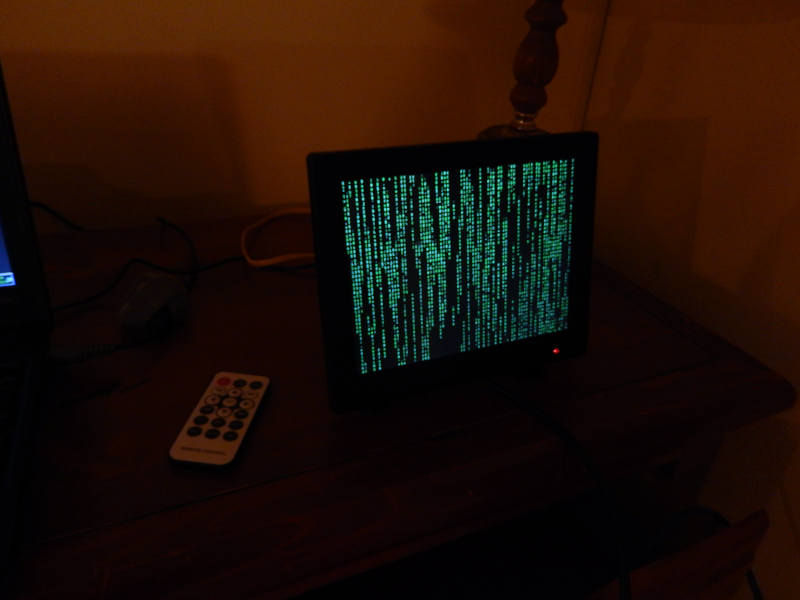 Aaaaaaand the keybindings list I had to check to figure out how to get these screenshots (just got the command to display this list off the Raspberry Pi board on Stack Overflow):

So there you have it – one of the latest additions to my computer cave. I also got a new Thinkpad X131e, which I’ll probably talk about in the next one, so stay tuned if you want to see more of me rambling on and on about my equipment, like anyone but me gives a fuck. 😛