Design a site like this with WordPress.com
Get started
Skip to content
psychocod3r Projects and Tinkerings, Retrocomputing, Virtualization April 14, 2019April 29, 2021 5 Minutes

So I thought I’d start some reconnaissance files on various people I know IRL. Why? Because I’m an autistic psychopath and that’s what autistic psychopaths do – they analyze other people’s psychology in order to find holes in their defenses that they can exploit. Yes, I am an evil genius. Mwahahahahahahahahah! But no, seriously, I just wanted to take up a hobby that would make me feel like a cool spy or secret agent. That and I have nothing better to do than come up with more evil shenanigans to pull with my computer. So I’m creating reconnaissance files on everybody. And they’re going to be super-secret and no one will know about them. And what would go better with secret reconnaissance data than a 1337 h4xx0rish command line interface straight out of a 90’s hacker film, a la MS-DOS on a monochrome green screen display?

I have created a new VM in VirtualBox dedicated to spy stuff and h4xx0r stuff. I call it Tactical DOS (I suppose SpyDOS would also be a good name). Essentially all it really is is MS-DOS 6.22 installed on a VM with a lot more memory and hard drive space than you would normally use, an AES-256 encrypted hard drive, and a lot of additional programs. These programs would include anything that either looks totally 1337 or can be used for highly technical applications, e.g. science and mathematics, low-level programming, performance analysis, vulnerability analysis, database management, even finances and accounting. On top of that, I will be using the VM on my 4:3 LCD screen with the colorscheme changed so it only shows the green channel. For an idea of what that looks like, here’s a photo of my monitor(s) with the red and blue channels turned off:

The 4:3 monitor is the one of the right, where Tactical DOS is running in fullscreen mode (the left monitor is displaying a completely unrelated Lynx session). And yeah, I did turn my lights off to take this picture. I take my h4xx0ring very seriously. 😛

Below is a screenshot of my VirtualBox control panel showing the memory and storage specs for Tactical DOS. As you can see, I’ve allotted 4 GB of hard drive space instead of the default 1 GB that I would normally allot for MS-DOS. I’ve also allotted 2 MB of memory because this is technically a Windows 3.1 machine.

And in case you’re wondering, yes, I did install Windows 3.1, because TBH it looks pretty cool in monochrome mode if I set the window and desktop backgrounds to black. 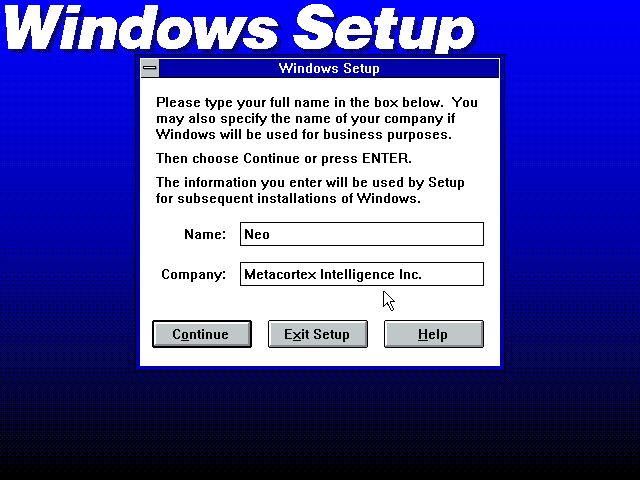 Yes, I selected Expert Mode for the installation. This means I have more dialogues to click through so I have more options. I actually didn’t change any of the defaults except the directory in which the Windows files would be stored (C:\WIN3 instead of C:\WINDOWS). I also used the company name Metacortex Intelligence Inc. instead of the usual Metacortex (in case you haven’t watched The Matrix, or have but just didn’t notice, that’s the company Neo works at at the beginning of the first movie).

After installing that and some other software, I went to encrypt my drive (because what’s a spy OS without security?). Unfortunately the hypervisor wouldn’t let me do that at first.

I eventually found the source of the problem, which was that the VirtualBox Extension Pack was missing. The weird thing is, I had previously installed the Extension Pack when I needed it to take advantage of hardware virtualization, but when I went to the Extensions tab, there was a big red X next to that extension. I managed to reinstall the correct version from the installer I had downloaded months prior. 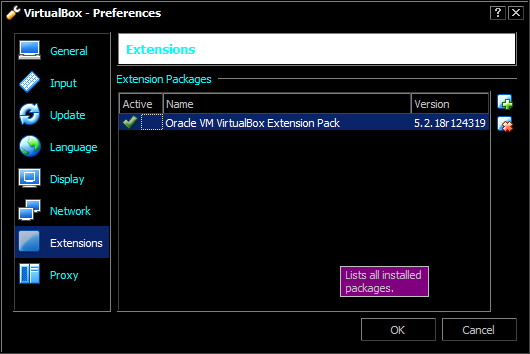 This is why I never throw away old ZIPs, TARs, ISOs, or other such files after I use them. 😛

After reinstalling the VirtualBox Extension Pack, I proceeded to set up encryption. I chose AES-256 rather than AES-128 and used a password consisting of 27 random characters (160 bits of entropy) for maximum security. When I restarted my VM, I got the following prompt, and entered my password accordingly:

Well, that’s about it for the VirtualBox portion of this log. From here on it’s all DOS stuff. One of the first programs I installed was Borland Turbo C. I had previously had a problem with it where I would run INSTALL.BAT from the floppy disk, then it would prompt for the second disk, I’d put it in, hit Enter, and it would then tell me it needed the batch file from the first disk. I realized I needed to copy the installer to the C: drive and run it from there. It was one of those “Why didn’t I think of that before?” moments. 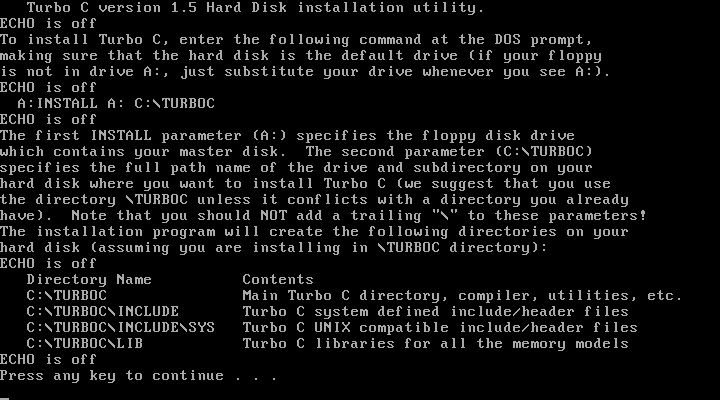 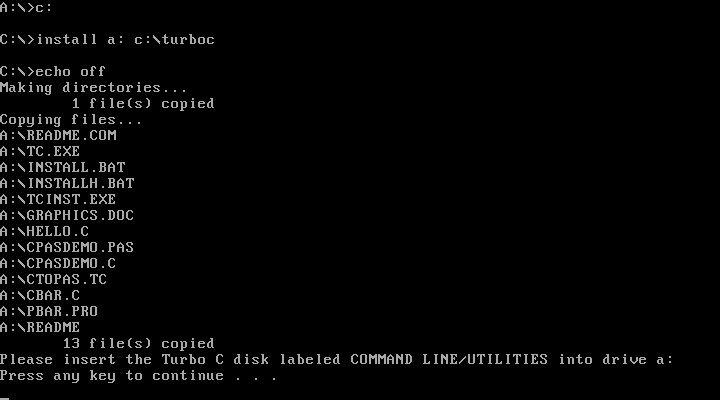 I also copied in the CuteMouse driver from an old floppy image I had lying around in my filesystem, installed it in my AUTOEXEC.BAT file, and also installed DOSKEY so that I could take advantage of command history.

I installed PC-INFO, which is a program that lists some of the specs of your system. I figured that would make a fine component in the SpyDOS arsenal.

…As does DOS Shell, which I installed from the Supplemental Disk for MS-DOS 6.22. I’m gonna be doing all monochrome green from now on, because reasons.

You may have noticed this is what was on my screen in that first photo at the beginning of this article. You might be wondering how I managed to extract the green channel for not only the monitor but the screenshot as well. Well, I could tell you, but then I’d have to kill you. People will always be more impressed by my technical feats if I don’t share how I accomplished them. 😛

Let’s see, what else is there? Oh yeah, there’s my latest download from Vetusware.com: Microsoft Macro Assembler, which I installed on Tactical DOS along with all the other programs. No hacker OS is complete without some assembly language.

Here’s my initial attempt at doing some assembly language programming – writing a “Hello World!” program without calling any library functions (because AFAIK my installation didn’t come with any of those convenient I/O routines like you would find in glibc or similar): 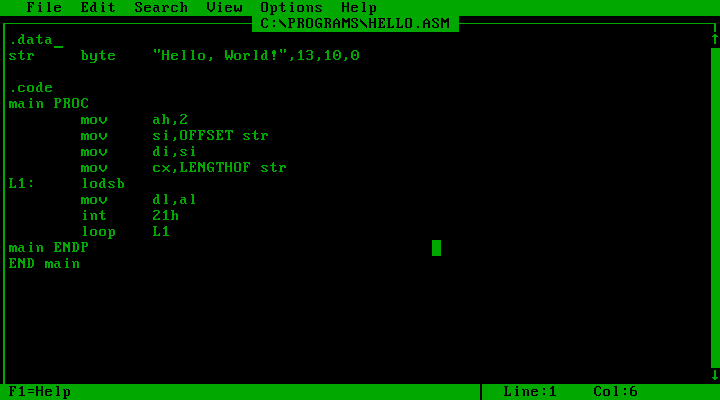 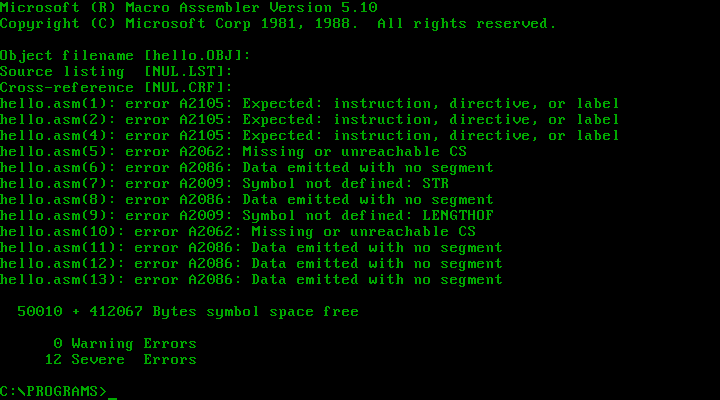 Alright, so clearly I need to RTFM on this one. I was using Assembly Language for Intel-Based Computers by Kip Irvine (which uses MASM as the expository assembler) as my reference, but apparently the assembler directives used in that book are not the assembler directives used by this version of MASM. Probably the README.DOC file that came with the software would be a good place to start if I want to figure out how to properly structure 16-bit assembly programs for MASM 5.x.

When I resumed work on Tactical DOS a couple days later, I started by giving it the capability to read optical media (or in the case of a VM, ISO files) using the same method as I used for my earlier Windows 3.1 VM. For brevity’s sake, I have screencapped the listings of my current CONFIG.SYS and AUTOEXEC.BAT files in one screen:

I then used Folder2Iso to generate an ISO file of my MATLAB directory, which was too large to fit on a 1.44 MB floppy image.

I then inserted the ISO file, went into my VM, and installed the files from my D: drive before running a demo. I found a lot of the 2D plots were invisible with the monochrome green screen because they used mostly red and blue channels. I’m hoping MATLAB provides a monochrome mode that I can access somehow. If not, I guess it’s not a big deal.