I just moved a few weeks ago and couldn’t take my old chair – the one I had been using at my desk. Never particularly liked that thing anyway. It was wood and not very comfy, and only really suitable for a carpeted floor. My bedroom in my new home has a hardwood floor, so I figured I’d drop a little extra cash and buy something with wheels on the bottom. Preferably one of those Ikea chairs that are all the rage with the geeks over at /g/.

Okay, I’ll admit it: This entire blog post is just an excuse for me to talk about Inspect Element and how cool I think it is. Because this time I actually got to use it to diagnose a problem with Ikea’s website. Pretty exciting, huh? I was on their order page, trying to place an order for a new office chair for my room. There was a button that said “BEGIN CHECKOUT”, so I clicked it in an attempt to proceed with the order. Nothing happened. Didn’t even change color, or change in any perceivable way that would provide some hint of interactivity. That’s when I pulled up Inspect Element to do a little detective work. 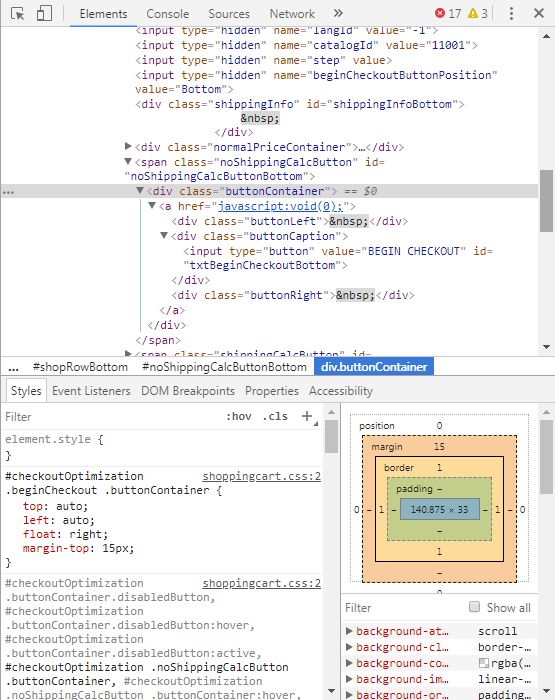 Well, looks like the <input> element doesn’t have any active parts. No onclick event handler attribute or anything like that. Just a type, value, and ID. Oh wait, it’s contained in an <a> element. It must link to the checkout page. But wait, what’s this? href="javascript:void(0);"?

That’s right. This button is void link, meaning it literally goes nowhere. It’s a link to nothing. 100% confirmed. This button doesn’t do jack shit. My theory? Somebody put that bit of Javascript into the server code as a placeholder. The server back-end was supposed to replace it with something else, but for some reason it fucked up and didn’t change it.

I then called Ikea to place an order by phone. I spent several minutes explaining to the lady at the other end that I knew what the problem was, that their server had made an error producing the web page and there was nothing I could do. She continued insisting that it was my browser’s fault. I’m using Iridium, which is a literal clone of Chrome (minus the spying). Yeah, she said, Chrome is one of the browsers that the page won’t work on. You need to use Internet Explorer.

I couldn’t believe it. This conversation was getting dumber and dumber. I mean, I’m not going to fault a low-tier customer service rep for not understanding all my technobabble about Javascript (I thought everyone in this day and age knew what Javascript was, but even so it doesn’t bother me all that much when I meet someone who doesn’t, especially if they’re in a low-level corporate drone job like that). But if she’s going to insist that I use Internet Explorer because the website won’t work in any other browser, that’s a whole different level of stupid. This is a multinational corporation with a billion dollar budget, and yet they can’t seem to make an order form that works on any browsers other than the one no one uses anymore. Or maybe the people they hired to do their back-end work were all incompetent Node.js developers who got their training watching Khan Academy videos in Starbucks. I wouldn’t expect that caliber of developer to know an algorithm from a hole in the wall, much less write one that works.

Anyway, I placed an order and she asked for my email address. She said an order confirmation form was being sent to my email. I go to my email to check out the form and find that it uses the same broken interface that led me to try ordering by phone in the first place.

So I said fuck it, and just ordered a chair from Amazon. It was $2 cheaper there too. Not sure if it was an Ikea model but it looked almost identical to the one I was trying to order before. Hopefully it’s not some cheap Chinese knock-off that will end up breaking after a couple weeks’ use. In any case, I’m not using my desktop setup anymore until the chair arrives and I get a chance to put it together, which won’t be for a few more days. I’ve disconnected my Thinkpad from my dual monitor setup and am using it on my bed for the time being.

It’s not just the physical discomfort of being at my desk with no chair that keeps me away from it though. I’ve also been having a weird problem with one of my monitors, and I think having to stand up and move around when I use my computer is contributing to it. The display has become kind of wonky of late, and it doesn’t appear to be anything wrong with the LCD itself, more likely a problem with the logic circuitry inside the monitor. I’m pretty sure I know the cause, because sometimes when I touch the metal part of my mechanical keyboard I get zapped by ESD, and often when this happens I see that monitor turn off for a split second and then turn back on again. I don’t know how, but the two devices are obviously connected in some way, and every time I unwittingly hit my rig with that power surge from electrostatic buildup, it knocks out a few more transistors in my monitor’s microcontroller, causing the display to get increasingly screwy. Since I don’t want to damage it any further, I’m not sitting at that desk until I have the proper furnishings, and maybe some sort of metal chassis that I can discharge myself on every time I sit down. Until then I’ll have to make do with what I’ve got.

I'm an insane person who likes to mess around with computers and write about it here. I'm a geek of all trades and don't like being limited or restricted to one topic. I like to explore and experiment with different technologies and concepts and generally shake things up. Topics I commonly write about include C programming, Unix and Linux, retrocomputing (mostly MS-DOS), virtual machines, data science, cyber-security, privacy, reverse engineering, and anything else that tickles my fancy at the moment. Occasionally I'll throw in a post about mathematics or passive income for variety. I have a lot of different interests but tend to be focused on tech. Use the widgets in my sidebar on the right to find a topic that interests you. If you like what I write, be sure to follow me if you have a WordPress account, and also share my content on social media. View all posts by psychocod3r

2 thoughts on “I Need a New Office Chair.”